Credit card payments have become a way of life for many Americans. Nearly 60% of families claim to use them for the convenience, and market innovations like Apple Pay have made it even easier to “charge it.” While credit cards may be easy to use, they’re also easy to pile up debt with. 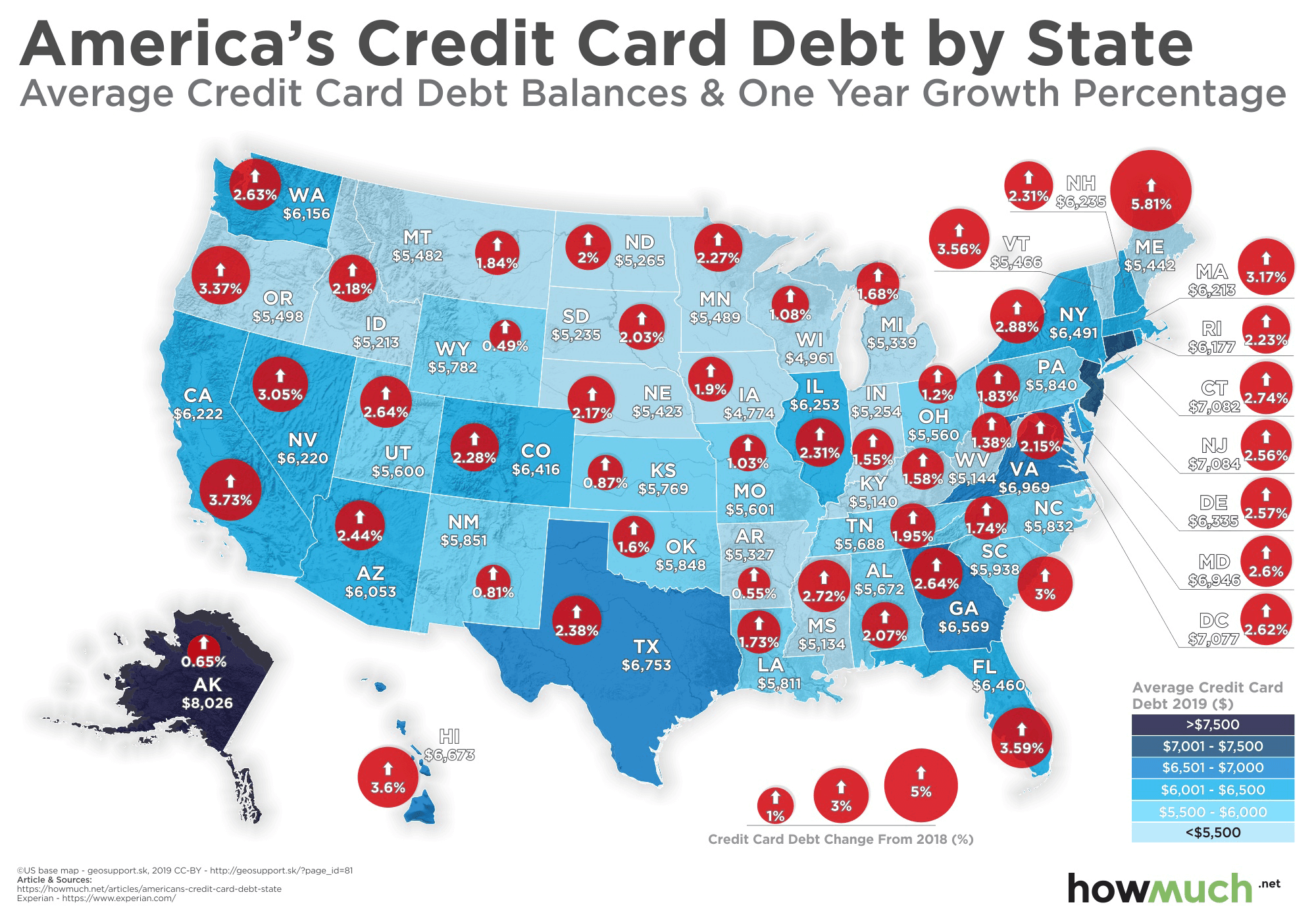 The data comes from Experian and compares the average debt in each state as of the second quarter of 2019 versus one year prior. A darker shade of blue on our map viz indicates a higher average debt, and a larger red bubble indicates a greater change from 2018.

Credit card debts are up in every state across the country, with annual increases in average debt ranging from 0.49% in Wyoming to 5.81% in Maine. Total average debt ranges from $4,774 in Iowa, to $8,026 in Alaska. Overall cost of living is a large factor in total credit card debt. The states with the highest credit card burdens, such as Alaska and New Jersey, are some of the most expensive states to live in, and Washington DC is one of the most expensive cities to live in. But even in Iowa, the state with the lowest credit card debt, the average balance is nearly $5,000. Compared to the state’s per capita income of about $50,000, this is still a sizable debt.

So what explains the explosion in credit card debt nationwide? Technological convenience is certainly one factor: according to a recent study by debt resolution company Freedom Debt Relief, groceries are the number one reason why people carry a balance. These consumers may do so out of convenience, or for the many perks that accompany many credit cards.

If not repaid promptly, however, even a grocery card bill can morph into a huge payment: individuals with good credit have an average credit card interest rate of 17%, while those with poor credit face average rates of 25%. Store credit cards tend toward 30%, for all borrowers. On top of that, many banks are cutting their credit card perks, while raising rates still higher.

While your bank card’s perks may be cut, it’s unlikely that your bank’s profits will. JPMorgan Chase and Citigroup reported that credit card sales were up 10 and 5 percent, respectively, in the third quarter. Meanwhile, profits at Visa increased 17 percent in its most recent fiscal year, while Mastercard had an 11 percent profit jump in its most recent quarter.

With these rates, it’s no surprise that over one quarter of Americans have more credit card debt than emergency savings.

Ed Bertha (941)-921-2117 relocated to Sarasota from Pittsburgh, PA in 1982 and has a deep understanding of the market’s idiosyncrasies and dynamics. Kim Burns (215) 499-0444 moved to Sarasota from Philadelphia, PA in 2015 and her holistic approach to occupational therapy from her practice up north incorporates a low-stress atmosphere to the real estate process.