China’s Superpower vs. the World.

In 2016, then-candidate Donald Trump said on the campaign trail, “My plan includes a pledge to restore manufacturing in the United States.” Manufacturing has remained a major emphasis of Trump’s presidency, perhaps never more so than during the coronavirus pandemic, with the invoking of the Defense Production Act. So, what is the state of the U.S., and the global, manufacturing industry? 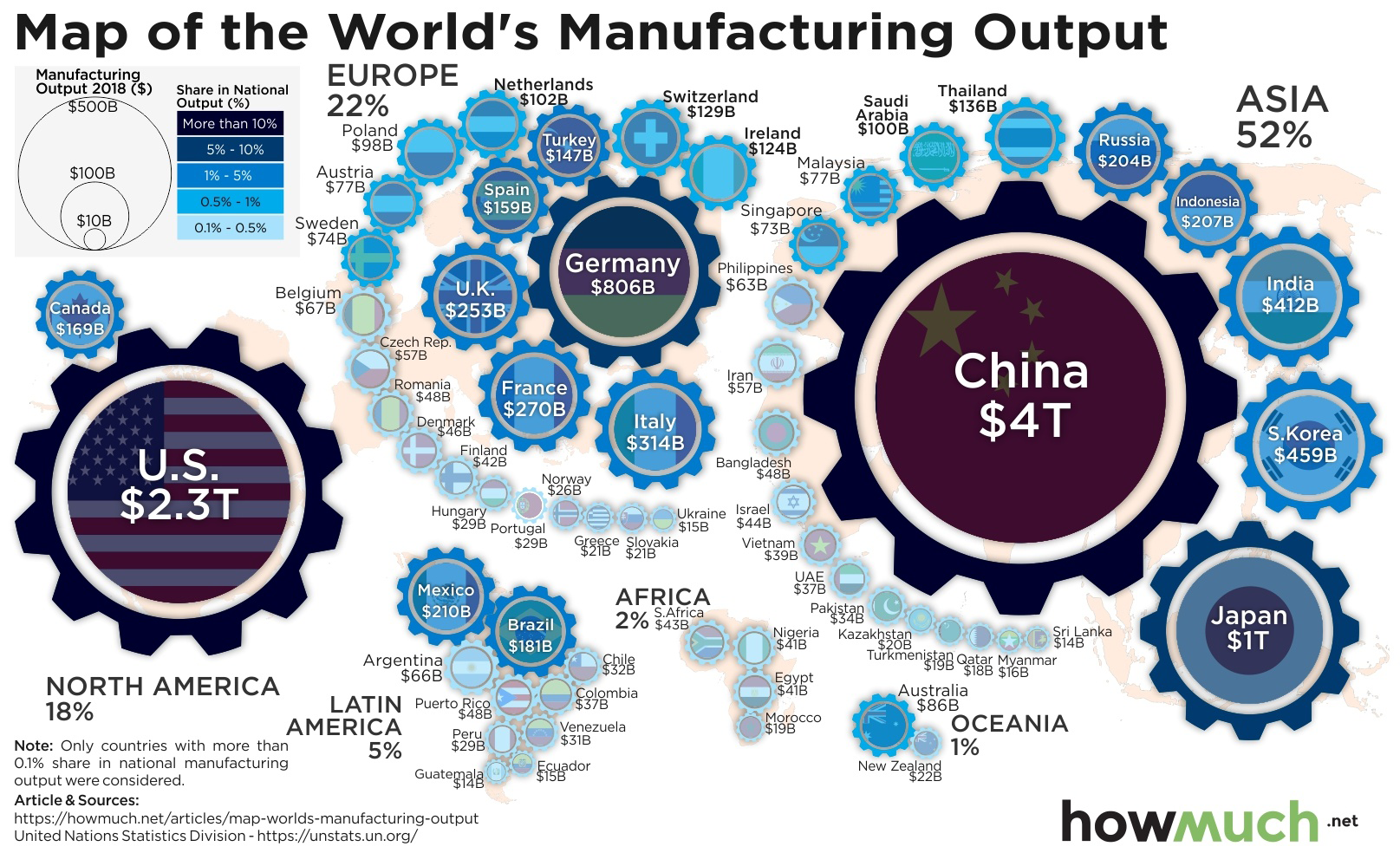 – The $2.33 trillion U.S. manufacturing sector made up 11.6% of the country’s economic output in 2018.
– U.S. factory production shrank by 1.3 percent in 2019.
– While half a million manufacturing jobs have been added during the Trump administration, job growth in the Midwest remains sluggish.
– Chinese manufacturing expanded slightly in March, as factories slowly came back online after the coronavirus shutdown.

Much of President Trump’s focus on manufacturing has laid with China: in August 2019, Trump ordered U.S. companies to begin looking for an alternative to manufacturing in that country. Calls for decreased dependence on Chinese manufacturing have intensified with the coronavirus outbreak, as lawmakers have questioned the natural security implications of relying heavily on a foreign country for essential supplies like pharmaceuticals.

While new data indicates that U.S. companies are indeed shifting production from China, the effects to the U.S. manufacturing economy remain unclear. Ironically, the manufacturing sector has been adversely impacted by tariffs on Chinese imports enacted by the Trump administration. As a whole, factory production in the U.S. shrank by 1.3 percent in 2019, a ten-year low.

All that said, manufacturing remains an essential component of U.S. GDP: at $2.33 trillion in 2018, it drove 11.6% of U.S. economic output, and comprise half of the country’s exports. And, while the sector is likely in for record lows during March amid the coronavirus pandemic, there may be hope for a speedy recovery from rival China’s manufacturing rebound: Chinese manufacturing expanded slightly in March as the country begins slowly rebounding from the coronavirus.

Unfortunately, other manufacturing giants have been slower to recover: the German manufacturing sector saw its steepest decline in over a decade in March, as did Korea. Meanwhile, Japanese manufacturers took a rare pessimistic view of their sector for the first time in seven years. This has led to the rare furloughing of workers at Nippon Steel, the world’s third-largest steelmaker.