This week’s MBA Chart of the Week shows the evolution of the securities held outright by the Federal Reserve Banks since 2007.

Between the summer of 2007 and November 2008, the Fed intermittently redeemed and sold Treasuries to offset the reserve-adding effects of credit operations, and it held less than $500 billion in securities going into 2009.

Historically, the outright purchases or sales of securities was a tool to manage the supply of bank reserves to maintain conditions consistent with the federal funds target rate set by the Federal Open Market Committee (FOMC). Starting with the Great Recession, however, the Fed has since employed multiple rounds of unconventional policy measures. 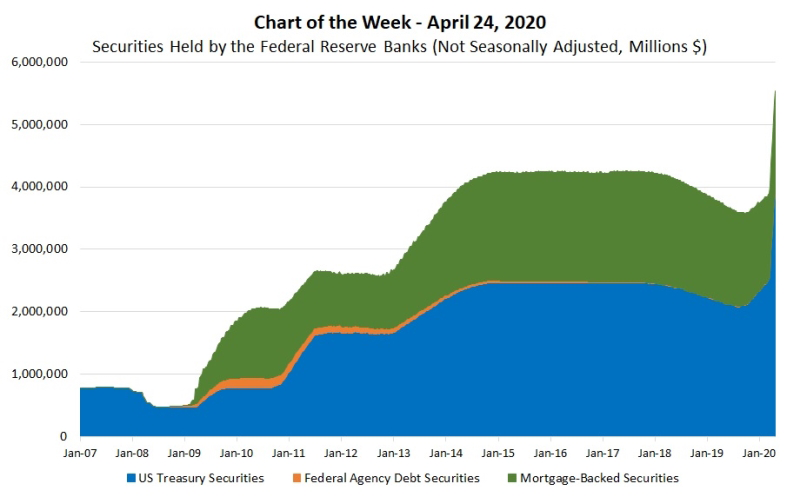 Source: Board of Governors of the Federal Reserve System

Between late 2008 and 2014, the FOMC authorized three rounds of large-scale asset purchase programs to ease its stance of monetary policy – often referred to as quantitative easing – and a maturity extension program, which lengthened the maturity profile of the Fed’s holdings of Treasury securities. Starting in October 2017 (when the Fed held $4.25 trillion in securities), the FOMC began to reduce its securities holdings to normalize the size of its balance sheet. Heading into 2020, the Fed held $3.75 trillion in securities.

On Sunday, March 15 (perhaps ominously on the Ides of March), the FOMC brought back the unconventional policy of quantitative easing (“QE4”) by directing the New York Fed’s Open Market Trading Desk to purchase at least $500 billion in Treasury securities and at least $200 billion in mortgage-backed securities. Since then, the Fed has taken additional actions to support the flow of credit to households, businesses, and the overall U.S. economy during these unprecedented times. As of April 22, the securities held by the Fed has reached $5.53 trillion.

We expect that at the FOMC’s next meeting on Wednesday, April 29, they will outline the pace of purchases over the next several weeks. Given that MBS markets have become more stable, we anticipate that they will continue to reduce the pace of purchases. Through the course of this year, while we expect a modest increase in Treasury rates, we think mortgage rate and Treasury spreads will decline, leaving mortgage rates little changed. With rates at or near record lows, this support from the Fed should keep the refinance wave going at least through the third quarter of this year.

To Sell, Buy or Invest contact Ed Bertha at (941) 921-2117 or EdBertha@DiscoverSuncoastHomes.com